Efforts to reduce vehicle speeds and encourage behaviour change can play an important part in helping the transport sector to reduce its carbon footprint. 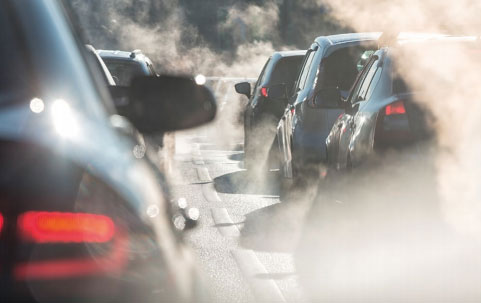 Emissions from vehicles are a worry. Pictured by LANA ELCOVA – SHUTTERSTOCK

‘Climate emergency’ was the phrase of the year for 2019 according to Oxford Dictionaries and – alongside many governments and the EU Parliament – half of UK local authorities have declared one. Since the UK published its Climate Change Act in 2008 pressure on governments across the world to act on climate change has accelerated considerably.

In the 2008 Act, the Government was required to set five-yearly carbon budgets, 12 years in advance, from 2008 to 2050. The Government is required to consider – but not follow – the advice of the Committee on Climate Change (CCC, also created under the 2008 Act) when setting these budgets.

Recent advice from the CCC flagged concerns to Government that, unless further progress is made by the transport sector, future carbon budgets may not be met.

Surface transport is the largest emitting sector in the UK, accounting for 23% of UK emissions, and they have not significantly reduced in recent years.

Comments on this site are moderated. Please allow up to 24 hours for your comment to be published on this site. Thank you for adding your comment.
{{comments.length}}CommentComments