Skid Resistance of road surfaces can be measured in multiple ways. In the UK three principles are used for traffic speed assessments of skid resistance, sideways force measurement, fixed slip and locked wheel.

The skid resistance standard, CS 228 (part of the Design Manual for Roads and Bridges or DMRB) specifies that routine surveys of the trunk road network will be undertaken with an accredited sideways force skid resistance survey device. These surveys are conducted at either 50km/h or 80km/h target speeds (depending on the road). The data is then speed corrected to 50km/h before analysis.

These devices employ a test wheel angled to the direction of travel and are described in BS7941-1. The angle of the test tyre forces it to slip against the road surface, allowing the skid resistance of the surface to be assessed through the measurement of forces on the tyre. The Accreditation and QA requirements for these devices are given in the Accreditation and QA specification.

If you are looking for a contractor to carry out skid resistance surveys compliant with CS 228 on your behalf, you may wish to check the list of Sideways force skid resistance survey devices below. On this page you can also find the latest accreditation certificates. In this table machines are referred to as having met criteria if they have met the mandatory criteria as defined in the Accreditation and QA specification for these devices. Some Network Authorities may also require a specific level of performance in some or all of the additional tests. Please see the certificates for more detail on the performance of these devices in these additional tests.

Currently, only one locked wheel device is operated in the UK. This is the Pavement Friction Tester owned by Highways England and is used for research purposes.

The locked wheel method is a method where the brakes of the test wheel are applied so that the wheel is rapidly brought to a halt or locked. The tyre is pulled along the test surface and the frictional forces are monitored during lock-up and for a specified period afterwards (typically only a few seconds due to high rate of tyre wear). The test wheel brakes are then released and the wheel spins back up to the vehicle speed. To maintain a constant vehicle speed during testing the driver increases the power applied in order to compensate for the increased drag.

The test method allows any part of the braking cycle to be studied. When a vehicle undergoes heavy breaking it experiences varying levels of friction (in addition to variation due to speed). Initially the friction experienced increases as the tyres begin to slip. The friction reaches a peak, typically at 10-15% slip, known as peak friction. After this point, the friction falls until the tyre is locked (100% slip). A typical breaking cycle (at constant vehicle speed) is shown below. 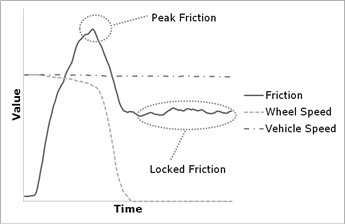 Antilock Braking Systems (ABS) on a vehicle attempt to keep the vehicle at or near the peak friction by releasing and then reapplying the brakes when the tyres begin to slide.

The nature of the locked wheel test method means that tests are carried out at spot locations and not continuously. Therefore, this device is not deemed as suitable for routine monitoring of road networks in the UK. However, during the locked friction phase of the testing, the tyre slips over the surface at the same speed as the test vehicle, so it can measure skid resistance at any practical speed up to about 130km/h. This combined with the braking cycle data means that this type of device is useful for research purposes.

As there is only one device, it does not currently undergo accreditation. However, for QA purposes it does undergo periodic dynamic checks at the same location as a sideways force device.

Fixed slip devices involve a test tyre which is geared to operate at a constant slip ratio. This is set so that the test tyre rotates slower in comparison to free motion, thus forcing the tyre to slip continuously over the road surface. GripTesters (GT) are approximately 1m long, 0.8m wide and 0.5m tall and weigh 87kg, and are towed behind a vehicle with a water container. These devices are further described in BS-7941-2:2000. Its size in comparison to other friction measuring devices is one of its key advantages, allowing increased manoeuvrability and more flexible deployment.

This device is commonly used for skid resistance measurements on airfield pavements and, in the UK, is used for road monitoring by some Local Authorities. In push mode, the device is fitted with a small water tank and has been used in this manner to test the surfaces of aircraft carriers, helicopter landing pads and pedestrian footways.

The standard speed for GT testing on highways is 50km/h and to date, no valid speed correction formula has been created for these devices. GTs are geared with a constant slip ratio of about 15%. This means that these devices measure low-speed skid resistance at a slip percentage close to what is typical of peak friction conditions (peak friction typically occurs between 10 and 15% slip). Currently, these devices do not undergo regular formal accreditation. However, the manufacturer maintains a "Golden machine" for comparison during servicing.

A correlation exercise between SCRIMs and mark 2 GTs took place at TRL in October 2009 (reported in TRL Report PPR 497). This exercise also investigated the repeatability and reproducibility of the GripTester devices. The trial produced a correlation of SC=0.89*GN which only applies to GT tests conducted at 50km/h, and to the specific surface types assessed as part of PPR 497. If a GT is used to monitor a network then appropriate Investigatory Levels (IL) should be calculated for the GT results rather than converting the GT data into SC data and using the ILs defined for sideways force devices.